Study in Austria at the Study in Europe In-Person Fair Georgia, September 30, 2022

© Study in Europe
As part of the EU initiative "Study in Europe: Enhancing the attractiveness of European higher education", the OeAD took part in the Study in Europe Fair - Georgia in Tbilisi on September 30.

The study fair was scheduled from 3 to 8 pm and was well visited. Approximately 1300 students had registered for the event. They took advantage of the opportunity to learn about studying in Europe and scholarships from 13 representatives of national promotion agencies and universities in Europe. Overall, Georgian students were very interested in studying in Austria and often already had concrete plans for their studies abroad. 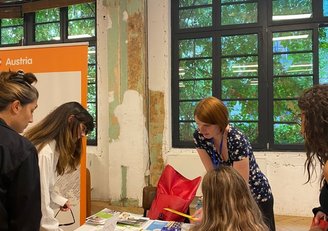