Reunion in Leiden - Annual Convention of the Centres for Austrian Studies

© Marija Wakounig
From June 8-12, 2022, the Annual Convention of the Centres for Austrian Studies took place in Leiden. The last meeting was held in Vienna in 2019.

After a two-year break, the annual meeting of the directors of the Centres for Austrian Studies (ÖZ) could take place again this year at Leiden University as planned. These meetings, which have been held at one of the locations of the Centres for Austrian Studies since 2008, focus not only on exchange and networking but also on presenting the scientific activities of the Centres. Doctoral candidates and students of the centres are given the opportunity to present their research projects. The resulting discussions and contributions of the participants always lead to joint projects and publications. The team in Leiden around Director Jeroen Duindam and Steven Engelsman had put together a varied programme, so that in addition to exciting scientific lectures, the group gained a highly interesting insight into the birthplace of Rembrandt and the history of the Netherlands. Furthermore, the party was received by Ambassador Harz at the Austrian Embassy in The Hague.

The centres focus mainly on the history of the Habsburg Empire, Austria, Central and East Central Europe as well as German language and literature studies or musicology. Two students of each centre presented their work. The great diversity of researched areas was evident in the presentations, which dealt with Holo-Kitsch, Wiener Werkstätte Fashion, economic voting, 17th century execution prints, Catholic influences, Hungarian concepts of Central Europe, or the stock market in the interwar period. Moreover, papers were presented on topics such as multi-ethnic Empire building in Russia and China, racism in sport, anti-interventionist protests in 1960s Yugoslavia, Ingeborg Bachmann's first Jewish love, or German-language crime literature from Prague that has fallen into oblivion.

In addition to research work, four of the centres also welcome a Doctoral Research Fellow (DRF) each year to research and work at an ÖZ for ten months to a year. This year, New Orleans DR Fellow Christian Stenico presented his work on serialized narration in US television, which generated an interesting discussion on changes in television viewing behaviour. DR Fellow Mirjana Plath did research at the ÖZ in Alberta/Edmonton last year and presented her work on the reception of German-language operettas in Stockholm in the first half of the 20th century. A former Richard Plaschka Fellow, Noga Sagi from the ÖZ in Jerusalem, was also a guest and presented her research on the Jewish community in Vienna.

With the wide-ranging lectures and new research findings, the importance of the Centres for Austrian Studies was again underlined. Contacts about a publication were already made during the conference. The participating students were able to network successfully and find many parallels in their research topics, which also led to lively discussions in the evening. We are excited to see what these new connections will bring about.

About the Centres for Austrian Studies:
The first Centre for Austrian Studies was founded in the 1970s by the Austrian Federal Ministry of Science at the University of Minnesota. There are now nine Centres with different focuses in Vienna, Olomouc, Budapest, Leiden, New Orleans, Berkeley, Minnesota, Alberta/Edmonton and Jerusalem, all of which have the academic study of Austria and East Central Europe as their goal. Annual meetings always take place alternately at one of the locations of the Centres. The next meeting in 2023 is planned for Berkeley. 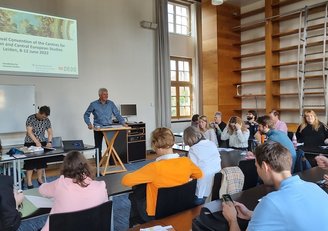