How my life changed by chance

© Olha Kotelianets
Kostiantyn Halahura is a 24 years old software developer from Eastern Ukraine, whose life was suddenly changed by chance. In June 2016, he obtained a Bachelor’s degree in Computer Science at National University of Radio Electronics (NURE), Kharkiv, Ukraine, Faculty of Computer Science at the Systems Engineering Department. Before defending his master’s thesis “System Design of Software and Hardware for the Smart House Based on Data Analysis” at NURE in distance mode in May 2022, he applied for an Ernst Mach scholarship to study at an Austrian University of Applied Sciences. Read more about his journey below.

My name is Kostiantyn Halahura. I am a 24 years old software developer from Eastern Ukraine, whose life was suddenly changed by chance. In June 2016, I obtained a Bachelor’s degree in Computer Science at National University of Radio Electronics (NURE), Kharkiv, Ukraine, Faculty of Computer Science at the Systems Engineering Department.

My university, Kharkiv Institute of Engineering and Construction (HIBI), was founded in 1930 on the basis of building the faculty of Kharkiv Polytechnic Institute (KHPI) and the Architectural Faculty of the Kharkiv Art Institute. The university has its current name since 2001 and houses 7 faculties, 33 departments, study programs and more than 7000 students, who can choose among 46 specialties from 7 areas of knowledge.

The topic of my bachelor’s thesis was “Development of Components for Information System for Issuing and Receiving Postal Items”, where a concept of fully automated post branches without personnel was proposed. In that time, my scientific interests have not formed yet and covered quite a wide set of areas – web development, databases organization, data engineering, and decision theory.

In September 2020, I started studying in the master study program “System Design”. In my first semester, one of our professors, the Head of the System Engineering Department, told us about the opportunity to apply for an Ernst Mach scholarship to study at an Austrian University of Applied Sciences. In those days, I already was attending a web development course in a Ukrainian IT company. Nevertheless, I decided to try – prepared all the necessary documents and applied. In that summer, I received two positive feedbacks: one from a local company and the other – from OEAD. The decision did not take much time: I made the choice to go in the direction of internationality, which was the right way, as I know now. I had never been abroad alone, I simultaneously felt mixed emotions: a little fear of the unknown and a foretaste of the beginning of a new life journey with adventures, prospects, and valuable experiences.

In the end of September 2021, I arrived in Villach, Austria, to study at Carinthia University of Applied Sciences (Fachhochschule Kärnten) for one semester in a similar “Systems Design” program, which I had studied  in my home institution.

During that time, I did not only refresh old knowledge related to advanced mathematics and computer engineering, but also got new skills in the “Data Science Experimental Lab” course, where we were working on a project using the nowadays popular Raspberry Pi microcomputer.  The “Scientific English” course trained my academic writing skills. Moreover, the master’s program was in English, and it helped me to enhance my spoken English level. Additionally, I took a basic course of German language classes– applied for “Austrian language”, which is a beginner’s German course for exchange students at CUAS. I think one of my significant achievements was to get rid of the communication hurdle that I had before going abroad. The most important experience was to ramp up my confidence of public speaking in front of people from different countries. Now, there are no boundaries for me, because my thinking and view of life became much wider.

From social activities, I can highlight beneficial onboarding and regular events from the International Relations Office, which noticeably simplified an adaptation to a new atmosphere. Besides, I was spending time with fellow Ukrainian students, who I met at CUAS, and my roommate from Pakistan, who became a very good friend. Together we explored interesting places not only in Villach, but in Austria and even in bordering countries. For example, we visited the beautiful city of Trieste, located in Italy on the Adriatic Sea shore.

After successfully finishing the mobility period, I was going to go back home on 24 of February 2022. But plans completely changed. This date entered in our history as the day of the Russian invasion of Ukraine. I was already on the train to Vienna on my way to the airport, when I received a message from the airline: flight to Kyiv cancelled. I hopped off the train and from then on, my new life stage began. I believe it was big luck that I was not able to leave Austria.

Fortunately, during my stay in Villach, I met a lot of good, hospitable people who threw a life vest to me. The International Relations Office staff helped me with accommodation, legalization, looking for a job etc. Thanks to them, I found a data engineering internship position at a company- representative of semiconductor industry, where I work now - in comparatively inconsiderable time. My job is related to creating tools for retrieving, processing, and storing data and providing client libraries to access server-side endpoints. Therefore, the skills and knowledge which I obtained during my exchange came in very useful.

In May 2022, I defended my master’s thesis “System Design of Software and Hardware for the Smart House Based on Data Analysis” at NURE in distance mode. The work was dedicated to creating a modular architecture of smart home with voice interface, that would allow solving existing problems like dependency from internet connection, using mostly proprietary software, failures during operating etc. I have chosen this research direction, because the concept of smart home is important today, due to the possibility to implement all ideas which were laid for a basis of home automation field at the beginning using modern technologies. I think in a couple of years, smart devices will become actually “smart” enough to hold this promising title, especially in conjunction with modern data engineering methods.

My plans for the future are still not determined, as well as the future of my country. For now, I will stay in Austria – a place which gave me a good background for further improvement, unlocked my personality and became a shelter for me. I am thinking about going to the next level of higher education – doing a PhD dissertation and probably trying my luck in teaching activities. But first I want to gain real working experience and deeper understanding of the domain I am in.

Among wishes to students who are only at the beginning of their interesting road trip to the world of studying, I recommend not being afraid of making the first steps, even if they seem scary, to carefully listen to the advice of professors and to be open to opportunities. Who knows, how your life can be suddenly changed by chance?

Carinthia University of Applied Sciences (CUAS) is located in the region of Carinthia, Austria. Carinthia lies in the heart of Europe and it borders Slovenia and the Italian regions of Friuli and Veneto in the south. The region of Carinthia comprises three large European language and culture groups allowing CUAS to benefit from the regional diversity. With approximately 435 full-time employees and over 700 external lecturers in 38 study programmes on five physical campuses in the cities of Villach, Spittal, Klagenfurt and Feldkirchen, CUAS is currently educating 2700 fulltime and part-time students in the Schools of (1) Health Sciences & Social Work, (2) Engineering & IT, (3) Civil Engineering & Architecture and (4) Management. More information 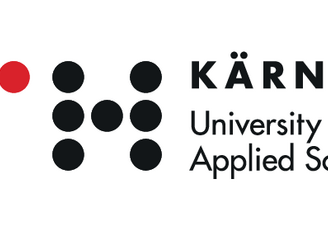