© OeAD/Elke Stinnig
From the University of Zimbabwe to the IFA Tulln: My journey in biotechnology. The event took place on the 12th May 2017 in Graz.

Gibson S. Nyanhongo, one of the beneficiaries of the North-South Dialogue Scholarship funded by the Austrian development cooperation, shared his experiences in Austria and his research activities. His journey to Austria began in 2000 while he was studying for an MSc Degree in Biotechnology at the University of Zimbabwe. He then proceeded to study for a PhD in Biotechnology at Graz University of Technology again supported by the OeAD, after which he established his research group under Professor Georg Guebitz. In 2012 he was allowed to do his “Habilitation” and in 2013 he joined the University of Natural Resources and Life Sciences, Vienna (BOKU). In 2015 he briefly joined Botswana International University of Science and Technology as professor and Head of the Department. 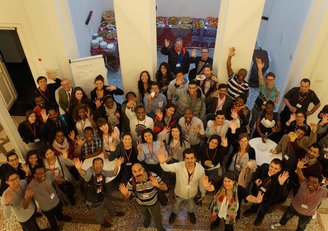